Editor’s note: The following is an interview with Stefan Jaeger, author of The Jackhammer Elegies, and Managing Director, Member and Corporate Communications, ASCE.  To buy the book in paperback or kindle version, click here. 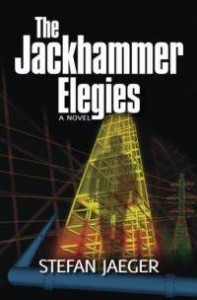 Without giving away important twists and turns, what is the basic plot outline of your book, The Jackhammer Elegies?

The story centers around Scott Carter, a civil/structural engineer who finds himself in an elevator at the top of one of his own high-rise building designs when a powerful blast in the basement changes his life. By using his knowledge of how the building is put together, he helps save his fellow elevator passengers. That thrusts Carter into the media limelight and ultimately into the crosshairs of a technically cunning terrorist, alias Jackhammer. This Jackhammer then begins targeting the lifelines of the city’s public works while also toying with Carter. Because of his engineering knowledge, Carter becomes a consultant to the FBI as it investigates the engineering angles to the case, teaming up with Special Agent Michelle Taylor.

What inspired you to write a book with an engineer as the protagonist?

Although not an engineer myself, I’ve worked more than 25 years with the profession, first at the National Society of Professional Engineers and now with the American Society of Civil Engineers. Interestingly, the most repeated refrain I’ve heard from engineers over those years is, “Why can’t we have a TV show L.A. Engineer?” (For blog readers from a younger generation, L.A. Law was a popular TV series in the late ’80s and early ’90s that featured a cast of characters from a law firm in Los Angeles.) Another, perhaps overused, characterization that I repeatedly heard was that engineering was the stealth profession. Engineers make modern civilization and our current lifestyles possible and yet the public doesn’t really understand how engineers contribute. Popular TV shows, movies, and novels are always about doctors, lawyers, or detectives, and if you’re talking about structures, architects generally get sole credit.

I’ve been writing fiction of various kinds for some time, and that refrain of L.A. Engineer stayed with me. As an author you’re always counseled to write about what you know, and I felt I could maybe work a lot of what I’d learned about professional engineering into an exciting story that might address that relative void of engineers in popular entertainment. The first draft of the book was written some time ago, and the opening of the novel was taken from what I’d heard had actually happened to a professional engineer in the first World Trade Center bombing in 1993. The vulnerability of our nation’s infrastructure also became part of the story.

So far what has the reaction to your book been?  What feedback has been most surprising or interesting?

The reaction has been tremendously gratifying. I’ve had both engineers and non-engineers tell me how much they enjoyed the book, through reviews on Amazon.com, personal emails, and face-to-face encounters. Readers have also thrown out comparisons to well-known authors, and that’s certainly humbling. An interesting, and also satisfying, aspect of the reaction is that readers are appreciating the insights into professional engineering and, in particular, civil engineering and infrastructure, that are woven into the book. One reviewer pulled out a number of themes that resonated with him: engineering ethics and licensure; networking to make things happen; private practice business; non-engineer managers in local public works positions; and the great personal pride in completing successful, tangible projects. One reviewer noted something that I certainly had tried to do, and that was not to present engineering and the engineers in an idealistic, white-washed manner, but to also show some of the frustrations and warts that are part of engineers’ lives.

If your book has the intended effect on your audience, what will change or be different in people’s minds when they think of engineers or engineering?

I guess that has two sides. For non-engineer readers, I hope that while they’re being entertained they’ll also become more aware of what engineers contribute to society and how engineers can be leaders. I also hope these readers get some insights into what it means to be a licensed engineer and how protecting the public is central to that. For engineers who read the book, I wanted the main character to provide a certain pride in how engineers can assert themselves in doing good in a public leadership role, as well as letting engineers feel a close identification with what the main character goes through.

An eye opener for me was just one more realization of how engineers have transformed our lives—in this case electrical and mechanical engineers. The self-publishing technology for the paperback edition is simply a marvel. Once the electronic cover and page files are loaded up and approved, the on-demand printing press takes the online orders and prints out one bound book at a time and ships it off, with no investment in inventory needed. That’s of course done for thousands of different titles being ordered and loaded into the press day in and day out.

Guest post blog by James Trevelyan, January 2015 My new book “The Making of an…

A Whole New Engineer (The Book) is Coming

This week I spent time at Olin College in Needham, MA with my co-author, Mark…